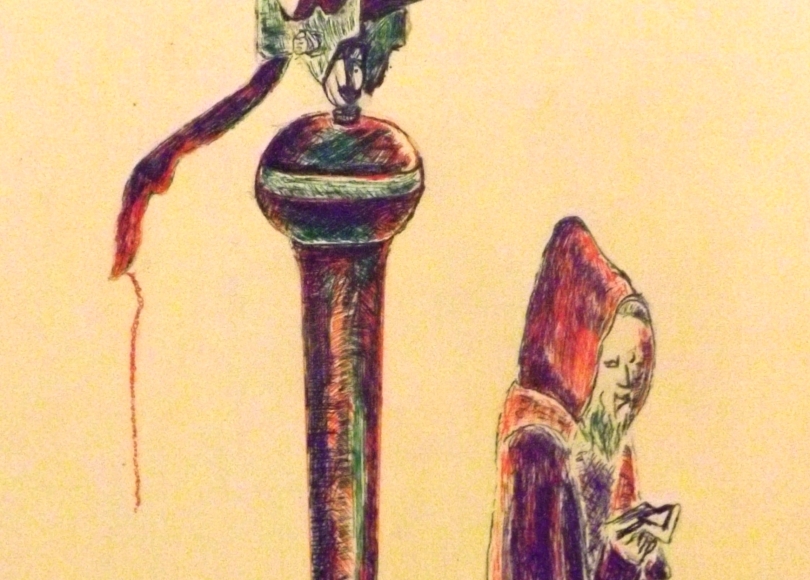 Most humans learn to speak before they learn to wipe. Speaking proceeds from the need caused by the itch. Because you have an itch you have a self that concludes, “you need to wipe your ass.” It’s a nugget of knowledge that you stow away in your back pocket until you are older and you say, “are you sure you’ve done enough to protect yourself against disease, bacteria and virus?”

I diary. I that is soul because the body is a zombie looking at itself sleep. Eye on the wind of intellect breathing through the holes. I want to see and I am sound. I am sound and I can see. I have eyes and I can bleed. What more does this thing provide me, this thing that needs something to give it a reason to be? I seek the same as all in the universe: to eat, to drink, take shelter and sleep. I have the same articulatory phonetics shared by all of my species. Together, we make company, rub one another’s wounds and give when there is need. Some of us are more protective of family, some more given to solitude than to husbandry. Some of us are more active sexually, with the more active females dancing on pogo sticks around the younger males.

Another of Bill’s notes. He is addressing himself as a 44 year old man. The last notebook, dated April 13, 1985, is filled with self castigating remarks. He is me.

Old man, dried up seed, shaking like a young man inside while it’s so hard you bleed. White on white with need, a bitch in stitches, collared, stamped, scorned from breeding. Why pretend you can understand? Why has your reason lost it’s place? Were you chagrined to advance through the stages of husbandry? Wife can’t soon be tossed without financial loss, and you can’t forget your need. I saw you. You think I care. You couldn’t keep it in your pocket while I held your underwear. Misfit Missus. Missybell Jezebel Jesus.

Satisfaction was never really your thing, at least not in giving. I think I see booze in the way we decorate the hate that brings us together. Life on a highway; a sneer, a stare. Ah , fuck you and your stinky underwear. I don’t need to stumble with humble stupidity into the We; be accepted as the affectionate idiot. I can see all the world looking at me on a stage pinned to a wall under a donkey’s tail. “Oh, well, he’s an idiot, but he’s ours, says a voice I remember hating as a boy but which all the others in the room acknowledge and laughed along with. It is the voice of a first grade teacher.

“Did you ever kill anyone?” inquires prof Cliffnut

“Uh, no. I wanted to but then I thought against it. I’d be dogged by guilt the rest of my life even if I could get away with it. I was just dreaming like I always do, sitting at a park bench, constantly in worlds of nowhere.”

“Don’t knock it. You are only 44. You can still write that book you have been telling me about. You can imagine how people must feel. You have good history skills. Write the story. An artist discovers his “I” as you call it by doing his art. Same with a teacher, psychiatrist, or coach who finds some higher experience from doing what he or she is doing.”

“…and if you like to read Emerson because his language reaches you in a way that other spiritual naturalists don’t, it doesn’t have to have any implication or association with any religion or philosophy.”

It is my turn to speak and Mrs. Cliffnut’s calves are bitch slapping me, screaming, “wake up!”

Prof Cliffnut gives me a sort of weird understanding sneer and keeps his eyes leveled on mine for a few seconds.

“Yeah. Uh, thanks for your time, as always, Professor.”

“Stop by in a few days and I will have that essay on the Great Vowel Shift you wanted.”

I get up and watch professor Cliffnut walk to the house. He is in his early 50s and still has a full mop of hair like Einstein. He was unable to have children, he told me, but he didn’t say why. Connie was adopted as a ten year old, fully grown, with a mind and unshakeable will of her own. Their house is built on the spot where Rupert Dinklpfuss lived with his wife and son, Virgie and Bill. I live on Peach St. in an old Victorian house along with an ever changing cast of characters except for Edwin Umbrian. He is a constant, arriving at the same places every day as I do.

Instead of crossing the street back to my apartment I cross Main St. from of the Cliffnut’s and walk west, past where the old cafe would’ve been and where there was now a strip mall with an antiques shop, insurance salesman, and a hydroponics dealer. (happy 420 good brothers and sisters.)

The voice of the Hypnotic Rooster says:

[the male wishes to posses with its organ because it figures that others are as enamored with it as it is.]

There is an old church building on the same side of the road and next to the cafe. I cross the road for the hell of it and walk along the north side of the street where there are a bunch of old two story Victorian houses with gothic arches; eight houses in a row, four boarders per floor. These are the poor, the vagrants, wanderers, parolees, drifters, drug dealers, and sex hook ups. Then there’s Jimmy’s liquor store and the old laundromat.

Across from the laundromat is a barely visible old foundation of concrete blocks overgrown with scrub oak and piled over with leaves. Six blocks away there are a few more houses on my side of the road and then the sidewalk stops and there is a 40 acre parcel of land that was once Hapflik’s Salvage and Repair. There is a municipal chain link fence along the north and the east sides of the property but the south and west sides are open. Beyond the chain link fence an open field to the south slopes into a deep gully south and west down the private and closed Barnett Rd. .

I stop and look back toward the Cliffnuts. I think of myself as the old Rupert. I am looking back at 1932 to an old house instead of the Cliffnuts’ house. It is a large house built by the man he works for. The years rush past the old train depot that used to be across the road. Coolidge, the depression, wagon to car, constant war. Fight fight fight ye manly men for the right to fuck! To submit another human instead of caring for him. An existential expressionless face with a quick monotone voice. No gracious customer service with a smile. (Blasphemor! John and Bill’s friend Calvin Dyme Jr. might say, or the Deaconess, Bill’s great aunt.)

I can see the old man now, standing in my footsteps and looking across the street at a large run down house, filthy and dilapidated He regrets seeing his own creation suffer a cruel fate. He is wearing an expensive business suit. He’s seen enough. He is leaving.