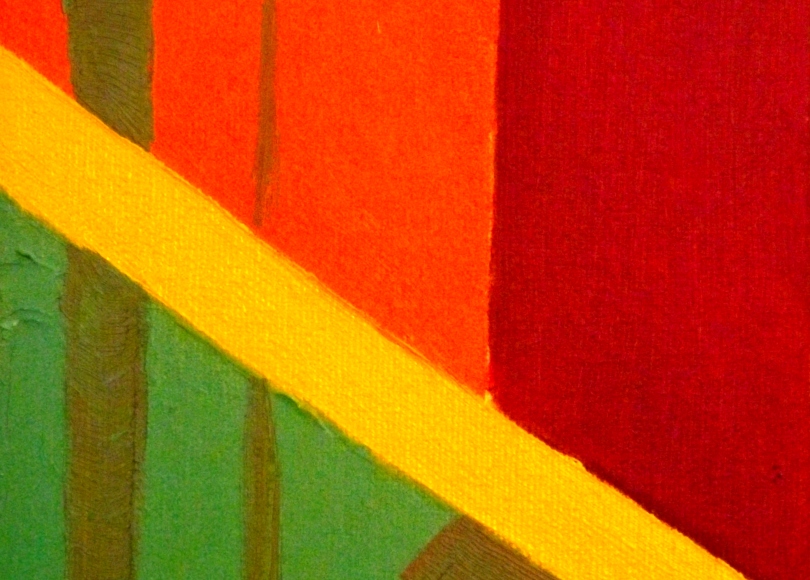 Clockchuk is a substitute teacher who considers himself a writer, only he hasn’t gotten any of his stories published and is too lazy to keep a blog. On a Friday morning Clokchuk is called in to cover for a history teacher who has gotten food poisoning. The class has just completed a project on Capitalism and is to begin studying World War Two. So on the drive to work Clokchuk imagines giving a lecture and an oral group assignment, dividing the students into four groups, Communist, Socialist, Capitalist, and Church State.

Clokchuk is an engaging speaker and a large man, standing six foot four and weighing two hundred and eighty pounds. He is known for the scalp hold. When a kid gets out of line Mr. Clokchuk grabs him by the flap of skin just below the scalp behind the ear. So most of the students are happy to listen to him rather than sit through a boring reading assignment. For his part, Clokchuk would rather lecture than watch students read. He finishes his lecture and divides the children into their four groups. For Clockchuk, awareness is reason that entangles instinct into a nest of false starts and frustrations, and we need others to reveal the self forsaken in sacrifice to the ideology of those around us. He likes to listen to children in groups interact because they always reveal the ideological convictions of the important people in their lives.

He walks among the groups and listens to their dialogue to hear any talk that would give away predispositions, views that could be commonly attributed to the commercial, political, and rhetorical slants of news editors and politicians, then he leans on the teacher’s desk at the front of the room for a moment. “Ok, a comet has struck the earth. The world has been taken by surprise and everyone is scrambling for survival. Each of your groups have to show that its ideology is best for civilization to follow if it is going to survive. Try to show the pros and cons of your objectives in a way that shows that you were listening in class today.

As he hovers near the Capitalists a girl and boy are engaged apart from the rest of the group.
“God was a liberal” says the girl.
“He was not. He was a republican. He said render unto Cesar” says the boy.
“Na ah. He loves people.”
“Yeah, but he doesn’t love it when people call you stupid for not agreeing with them.”
“You’re stupid because you’re stupid. Nobody can do anything about that.”
“God said we have dominion over earth. My existence is more important than a bug or a tree. To think that a tree has rights is stupid.”
“He didn’t say go ahead and destroy the planet.”
“If the planet was being destroyed I am sure the people who own it would do something about it.”
“Who owns it?” the girl scoffed.
“The Communists in Russia and China, the Capitalists in America, the Socialists in Europe, the Muslims in the Middle East.”

Clokchuk was simply happy to hear that the boy, a well known under achiever, had paid attention to at least part of the lecture.

“Wrong! The people own the planet everywhere and the governments are supposed to do what the people want them to do.”
“The people are a few hundred wealthy families that own the majority of the entire world, a legal and political class, university elites and high ranking military officials. Everyone else is a nobody.”
“You are a nobody. I ain’t. And if I were President I would make sure you can’t kill deer with your gun.”

Over at the Church State group someone said “hey, the Indians could rule things better than Jews, Christians, or ,Muslims. And they are good at computer programming. They could devise a virus that would effect everyone’s phone and hypnotize them with a picture of the elephant god. He don’t care what you do just as long as you stare at him once in a while. Then through the elephant we could tell everybody what to do.”

Clockchuk smiled to himself and said “ok, gang. Let’s try to wrap things up.”

Despite the suggestion of an elephant god the church state begins devising a plan based on the idea that everyone would follow their own instinct which was to do evil to others unless there was an authority that told them what was ok to do and not to do. Clockchuk walks away while they are making a list of buildings, books and works of art and artifacts to destroy in order to show people what was acceptable to god and what was not before he strikes the earth with another comet.

The Socialists take on an authoritarian perspective because Jimmy, the leader whose dad was a rabid listener of radio populism who was convinced that god would send a comet to destroy the earth before the United Nations had taken his house away, did not know the difference between fascism and socialism and used the terms interchangeably. When someone said Mussolini was a fascist, nobody was quite sure who he was.

“Just think of it as the banks and business being married to the government and telling them what to do while the government spends and borrows a lot of money to buy military equipment and has security thugs that let you have no personal freedom while telling you that you owe for the thugs and the military equpiment” said Clokchuk.

“Hah hah! Close. We’re getting there” said Clokchuk. “It was a different existence for everybody at that time. And we have to remember that there are quite a few differences between fascism, nazism and socialism.

Clokchuk then approaches the Communists. Someone comes up with the idea of poisoning agitators as a more subtle form of controlling the population. “Rasputin’s shadow on everyone” says Clokchuk. A comment which draws only blank stares. “Never mind” says Clokchuk. Someone says China is trying to take over the world by birth. One day there would be so many of them that they would be everywhere and would take over the world by population unless there were laws that kept them from having children. Clokchuk hadn’t heard that one. He looked up at the clock. There was only ten minutes left before the bell. He had an idea for a short story thanks to the elephant god. And he already decided the god’s name would be the same as the school’s principal, Dan.“Why don’t each of the four groups finish writing down what we came up with and hand your papers to me on your way out.”