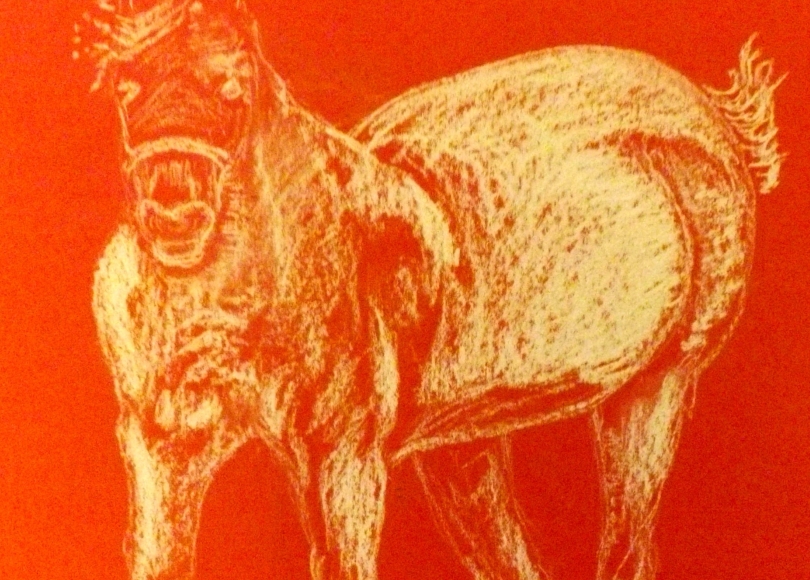 The old horse is led from the stable
and taken behind the barn where he
is fed dry hay and given a pale of
water. But he is disinterested,
dropping to roll instead and
thrashing from the pain
strangling his stomach.

Mike the Vet has come to this farm
nearly thirty years to tend the dying,
all the while witnessing the baby,
the toddler, the girl, the young woman
leading the horse that had been there
even longer, that marked the change in
voice from infant to adult, girl to
woman.

Mike greeted Tom, who was there
to pick up the dead animal, and showed
him the horse lying with fluid draining
out its nose, and with unreleased feces
hanging out of its rectum. Tom chained
its legs and winched the horse into the
back of the hauler.

As they waited for the horse to be
dragged up into the hauler Tom turned
to tell Mike “crazy weather changes
this year, been really tough on livestock.
Kinda looks like pneumonia in most
cases. Must be busy for you too, huh?”

Mike heard the words echo between his
ears but his response was slow as he
disengaged his imagination from the
girl playing with her horse.

“Here, Mel, I picked this for you from
Grandma’s garden. Shh!I’ll just put it
back here in the corner so only you
can see it. We won first prize yesterday
Dr. Mike. Do you think Mel will be
ok until morning, I got a date tonight.
Dad will be with him. Dad, can you
make sure Mel gets that special grain
I bought him? He isn’t looking so well
and I have to be getting back home.

Mike watched the horse’s belly being
pulled over the edge, it’s mouth open
and head bouncing with greenish fluid
draining out it nostrils. There was a light
wind, no sun seeping through the clouds.
From inside the barn a gelding is calling
for his companion of so many years,
anxious to hear a response. Mike can
hear Tom speaking but runs to pick up
a white rose that had been placed on the
ground near the horse a few hours ago.
Tom watches the doctor pick up the rose
and without looking back get in his car
and leave.